Water in the natural environment is flowing and adaptive as in a river or ocean.  For example, bodies of water will naturally flow around or absorb the impact of a boulder thrown into them.  Ocean waves adapt to the shoreline upon which they are crashing.  Their water subsequently retreats into the sea and emerges as newly formed waves. 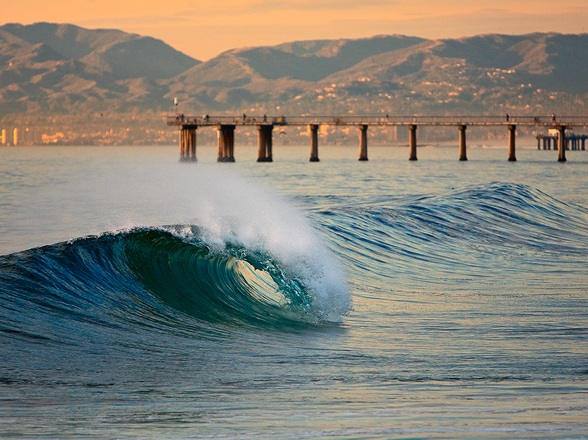 Image 5 shows a curling wave off of the coast of California. An example of the fluid dynamics of Water (pulling back, gathering strength, and crashing back into the shore) is demonstrated.

Water related movements in Martial Arts are normally described as flowing.  They typically involve ebbing and flowing movements described as wave like.  These kinds of motions are roughly analogous to the path water takes when pulling away from the shore then crashing back in.  Similar Martial Arts movements resemble quick strikes followed by countering moves. During the retreating motion, power can be redirected into striking counter moves.   The key point of this approach emphasizes synergistically working with the strike and redirecting the energy to a beneficial technique.

Martial artists comprehend this principle by observing the properties and resilience of flowing water.  Water will naturally flow around something in its path and follow a path of minimal resistance.  Another feature of the water movements and principles is that water forms itself around and thereby adopts certain properties of encountered obstacles.  A simple example is represented by water assuming the shape of a container into which it is poured. Martial artists employing this kind of style tend to flow with the movements of sparing partners and thereby adopt some of the properties (styles and techniques) of their opponents.  Examples of these properties could also include timing, rhythmic breathing and fluid styles. The timing sense of a martial artist engaging water movement techniques would be aligned with that of an opponent.  Correspondingly, opposing martial artists may move more in unison.  When an attack is initiated, the water movements result in evasive maneuvers or fluidly prepared blocks. Poorly matched timing could result in a failed block or incorrectly executed evasive techniques.  Breath rhythms may begin as a wave-like breath pattern requiring a large breath over an average span of time.  Related offensive strikes are subsequently attended by the release the majority of the air (timed with the strike).  An additional water breathing approach synchronizes a martial artist’s breathing with that of their opponents.  A clearer picture of how an opponent is breathing and reacting to specific techniques can be drawn.   This approach also helps to identify key attack or disengagement opportunities.

The archetype associated with water is a scientist (Russo, 2010).  The scientist observes and gathers data and makes a calculated response based on collected data.  Another aspect of this personality is characterized as fluid and adaptable (not bound to a heavy structure).   Related scientists in a military scenario would be positioned as planning officers (Russo, 2010).